Same in a different way

Mutual human differences based on race, gender, age, nationality and religion, social and material status, sexual orientation, developmental disorders, places of residence, etc. put young people on social margins. The consequence is the exclusion of young people from vulnerable groups and out of social life.

UNICEF research shows that around 65% of students and students have experienced violence at least once, and 22% reported frequent violence from people in their age. The coalition against discrimination indicates that the usual problems that Gipsy people and other national minorities live in, minority religious communities, LGBT groups, people with disabilities, poor people, asylum seekers, not only they do not solve, but are increasing daily. This leaves a clue to the growing up of young people who cannot step out of the vicious circle of discrimination.

The same in a different way – youth against discrimination is a project implemented by the European Youth Center in cooperation with the Secretariat for Social Protection of the City of Belgrade, which for the main goal has to raise the awareness of young people and points to the harmful consequences of attitudes and actions that spread intolerance and encourage marginalization of young people from vulnerable the group. We intend to awaken the sense of responsibility and encourage the engagement of young people in the protection of the people of the same age who suffer any form of violence (verbal or physical) or exclusion, which can only create preconditions for improving the position of young people from vulnerable groups and improving the quality of their lives.

With this project, we intend to give voice to young people from vulnerable groups who are exposed to intolerance only because they are different (ethnicity, race, sexual orientation, disability, subculture, poverty, refugee etc.) through creating mini video clips and letting young people know about the need for their responsible engagement for tolerance and acceptance of the people of the same age by conducting a viral campaign and organizing workshops in high schools in Belgrade. 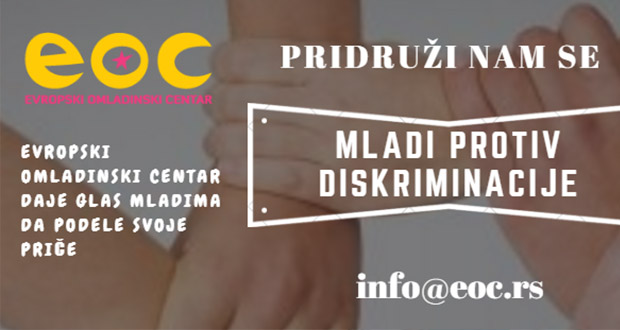